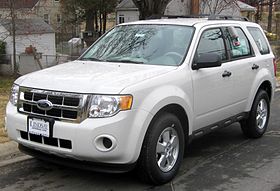 How Much Is My Junk Ford Escape Worth in Cash?
The Ford Escape has between 3,247 and 3,457 pounds of curb weight to offer, making it an attractive model for auto recyclers and scrap metal dealers. However, the bulk of the car’s value will come from salvaging parts and components, so a quote is necessary in order to get an exact price on your car. You can expect to earn anywhere between $300 and $4000 for a junk Ford Escape.

As reputable junk car buyers, we carefully appraise vehicles brought to us and try to offer the highest possible price for them. In order to do so, we look at the following factors:

All of these factors combine to form a base price for a particular vehicle. Depending on the demand and availability of parts, additional accessories and components may increase this value significantly. We’re prepared to pay up to $10,000 when buying a used car in decent running condition, so give us a call and find out how much yours is worth!

About the Ford Escape

This particular model is a compact crossover vehicle originally released in 2001. The Ford Escape resulted from a collaboration between Ford and Mazda, with Mazda releasing the very similar Tribute as a result. The manufacturers’ concept was to create an SUV that does not use a body-on-frame design, but instead a unibody with a fully independent suspension. These vehicles weren’t designed for full off-road use, but had many accessories and components designed to make occasional off-road use viable.

The second generation Ford Escape includes an electronic stability control system as standard and an updated exterior. In addition, the interior was completely redesigned, with a Ford family navigation system included.

Is It Time to Junk My Ford Escape?

If you are thinking of selling your damaged Ford Escape, you might be able to get a better deal by selling it as-is. Junk Car Medics is happy to purchase damaged and worn vehicles of all kinds, offering top-dollar rates for them around the country.

Should I repair it first before I sell my car online?

However, if you’re thinking about repairing your vehicle and selling it on the used market, an arithmetic exercise can help you determine where the most value lies.

First, get a quote from our appraisers on how much you can get selling your junk Ford Escape for cash today. Next, get a quote from a mechanic on the cost of repairing the vehicle entirely. If the repair costs are greater than the value of the vehicle, you’re better off selling it as-is in most cases. Call us today and get that quote!