Air Filters 101: What Role They Serve, How to Change Them and the Leading Brands

Home » Air Filters 101: What Role They Serve, How to Change Them and the Leading Brands

or click here to get your online offer now.

What's Your Car Worth? 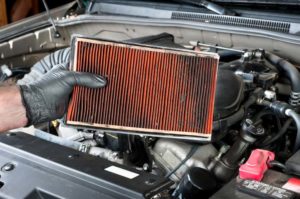 There’s no question that a vehicle’s engine is the key cog that drives it. A healthy engine runs clean, performs well and ensures a vehicle achieves the best possible fuel economy. An unhealthy engine, on the other hand, is the opposite.

Engines need a few key components to run well. They need spark plugs, which help fire it. They need fuel. And finally, engines need air, which helps it burn the fuel. That’s where your air filter plays such a crucial role- it’s the key component that stands between the air entering your engine and all the air on the outside of it.

The Importance of Air Filters

Like we said in the opening, air filters serve as the interceptor between the air outside of the vehicle and the air that enters the engine. Good air filters block up to 98 percent of dust, pollen, contaminants, and debris from the outside to help keep the engine running clean and efficiently. These contaminants are then trapped in the air filter, which prevents it from getting to the engine. However, when the air filter has become too soiled, then its effectiveness can start to slip, thereby letting more contaminants into the engine itself or not enough air altogether. It’s why it’s important to change the air filter regularly. In fact, most manufacturers recommend changing it at least once every 12,000 miles or once a year – whatever comes first.

An effective air filter is key to a healthy engine. The good news is that replacement air filters are inexpensive to purchase and easy to install. While you can check the condition of the air filter by simply popping the hood of the vehicle’s engine and inspecting it visually, there are a few other signs that you should be watching out for to determine whether it needs to be changed.

Signs and Symptoms of a Bad Air Filter

Though most automakers recommend changing the air filter every 12,000 miles regardless of its condition, certain driving conditions may require it to be changed more often. That’s one thing to be cognizant of when it comes to your vehicle’s engine health. For example, if you regularly drive through construction zones, on dirt roads, or in other environments where air contamination is high, then you’re likely going to need to change your air filter more often than just once every 12,000 miles. Here’s a look at some other signs of a bad air filter:

How to Change an Air Filter

The good news is that air filters are inexpensive and it’s super easy to change them. So, if you’ve hit 12,000 miles (or a year – whatever comes first) or see that your filter is heavily soiled, know that this is an easy DIY task. First, check your owner’s guide and see what type of replacement air filter you need. Once you have it, pop open the hood of your vehicle. Next, follow these steps:

That’s all there is to it. It’s pretty simple stuff. It only takes a minute or two to complete and can save a half hour or so of labor at the auto repair shop. Plus, you can purchase air filters online or at any auto store at an affordable price.

When it comes to buying a new air filter, look for the brands that have built a good reputation in the industry. Some of the best air filter makers include:

What's Your Car Worth?