According to Junk Car Medics, the national average for scrap car prices is $563. The price is based on a model of mid-sized vehicles manufactured between 2001 - 2006. These mid-sized vehicles account for more than 80% of all junked cars.

How We Came Up With This

We started with over 50,000 data points and filtered it down to 2002-2006 model year mid-size vehicles.  These were by far the most commonly junked cars.  And as you'll see below vehicle size and model year play a big part in the price so narrowing it down to a common group was best.

*Prices are only for reference and informational purposes and are based on averages. Junk car buyers are NOT held to these averages.

What are Scrap Cars and Junk Cars and Why Are They Valuable?

Scrap cars and junk cars are the same thing.  Scrap and junk cars are vehicles that are sold to scrap yards for their metal. The heavier a scrap car, the more money it fetches. Scrapyards buy these cars for valuable metals such as aluminum, brass, lead, copper, and silver.

The most common cars sold for metal are models manufactured between 2001 - 2006.  Discover all the ins and outs of what are junk cars.

What is the average price of a scrap car nationally?

The current average price for scrap cars nationally is $563. National prices will vary from local prices because of location, demand, and supply constraints.

Areas with large steel mills will have better scrap car prices because of increased factory demand.

What is the current price of scrap cars by State?

There are three main reasons why national scrap metal prices differ. The first reason is location. States near large cities, ports, and transport hubs have low business costs. Most of the scrap metal bought is sold to larger scrap yards in different parts of the country. These scrap yards then sell the metal to recycling facilities.

Below is a table for scrap prices from other states in the USA.

Cities with the lowest scrap vehicle prices were Kansas City, MO, and Columbus, OH, at $369.82 and $381.14, respectively. Below is a table of scrap prices for other major cities in the country,

As of October 2022, the car with the highest average scrap price is the Hyundai Sonata that is currently being sold at $818.84. Chevrolet Cruze comes in second at $776.15.

Below is a table of the top ten vehicles with the highest average scrap prices.

Below is a list of the top 10 car brands with the lowest scrap car price.

Here Are Scrap Car Prices by Vehicle Make in 2022

Below is a list of the average vehicle make prices in the country.

Below is a list of average vehicle prices based on the year of manufacturer.

Are the car scrap prices high in USA?

An increase in used car prices has made it difficult for people to buy used vehicles. Demand for used vehicle parts has created artificial shortages, which have resulted in increased costs.

Over the last few months, prices of used vehicles have been falling. After some time, demand for used car parts will fall because drivers will afford to buy used cars. A fall in demand for used spare parts will result in the cost of scrap metal falling. 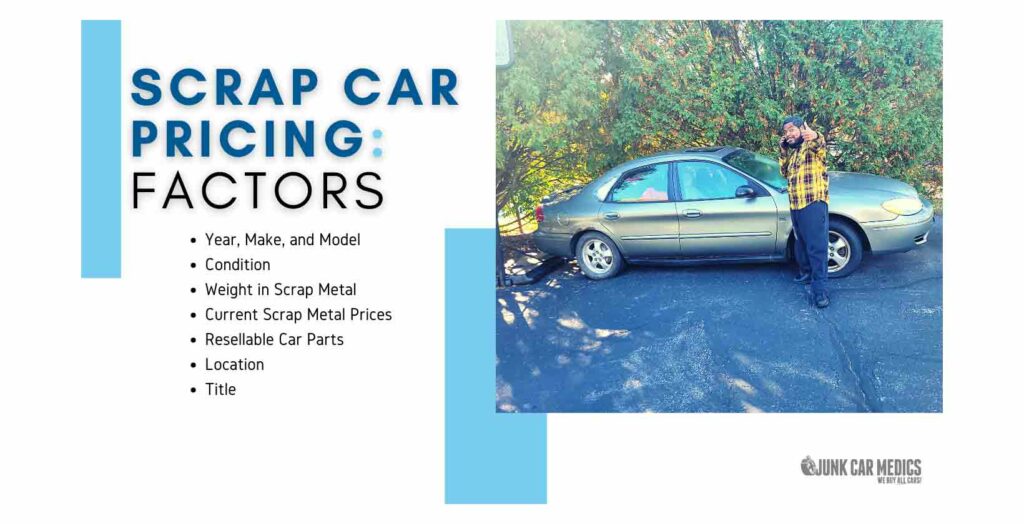 How Much Are Scrap Cars Worth?

7 Factors determine scrap car prices. These factors are listed below.

Scrap car prices are affected by seven main factors. Knowing these factors is vital because you can estimate how much a scrap yard should pay for your decrepit car. To come up with an accurate estimate, consider the average price of a similar scrap vehicle in your local area.

Scrap sellers should get free quotes from reputable online junk car buyers to determine how much a junk car is worth.

What are scrap car prices per ton?

The current scrap vehicle price per ton is $145. One ton equals 1,000kg of metal. In 2011, scrap car prices hit a record high. This was caused by several factors, such as an increase in demand from the international market and an increase in local demand.

In 2021, the price of copper scrap hit a record high. This was caused by increased demand from the manufacturing and construction industries.

The scrap prices of a car body will depend on its weight. The heavier the car, the more the cost. Scrap vehicles that weigh two tons are worth $290.

When are scrap car prices the highest?

Scrap car prices are currently very high. However, it is impossible to predict what prices will do in the future as the scrap market is as volatile as the stock market. Values are high now because of the automotive chip shortest and people holding onto their cars longer but we do not know what will happen in the future.

How much is a car body worth in scrap?

A car body is currently worth $290 on average. The national average for steel right now is $145 per ton and the average weight of a car is right around 2 tons. 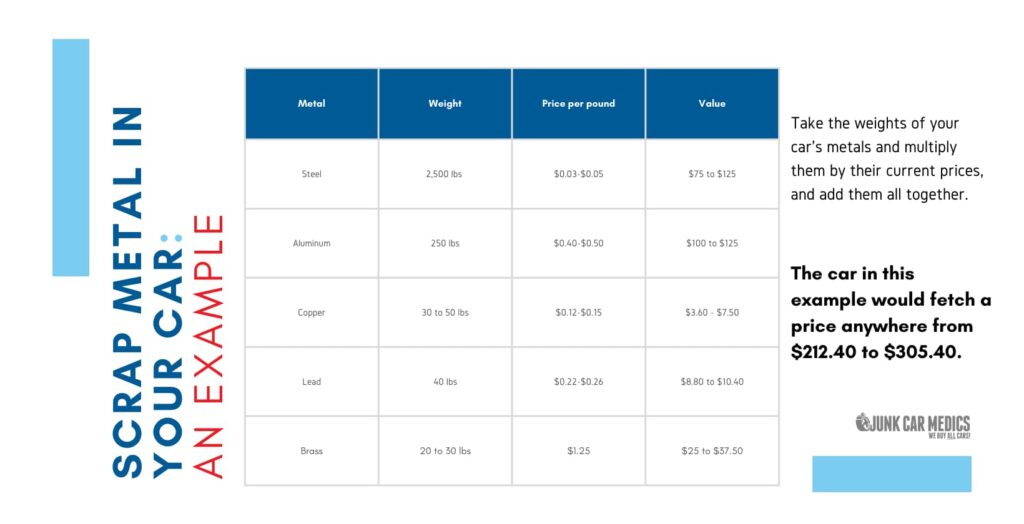 What are the valuable scrap metals in cars?

There are four main valuable metals in a vehicle Aluminum, Steel, Copper, and Brass.

Aluminum is lightweight and used to manufacture suspension parts, bonnets, and bumpers. The second valuable metal is steel. Steel is used to manufacture components such as the engine, chassis, and door panels. The third important metal is copper. Copper is mainly recycled from copper wires and is used to create a car's electrical system. Lastly, the fourth valuable scrap metal is brass. Brass has a gold-like appearance, and it is found in old vehicles. Other metals found in small quantities are lead, silver, and iron. Silver is used in the decoration of cars.

In evaluating a car, a scrapper takes the weight of the vehicle, multiplies it by the current price for scrap metal, and then arrives at a figure. What the offer would ultimately be less than that figure to account for the time and effort it takes to dismantle and crush the car.

How much are scrap car parts currently worth?

The price of a scrap car engine will depend on its weight. The heavier the machine, the more money it fetches. The third valued part is the transmission. A used transmission system has a value of $500 -$1400.

Lastly, scrap vehicles have radiators. A radiator acts as a heat exchange point. It is designed to cool the engine and protect it from stalling. The scrape value of a radiator is $5 -$30.

Are Scrap Car Prices Lower Without The Title?

Below is a list of average prices offered to junk car sellers with different types of titles.

It is possible to junk cars with no title but you are likely to receive less money.

Who gives the best price for scrap cars?

Junk Car Medics gives the best price for scrap cars because we get junk cars in front of a network of buyers and get buyers to offer their best price for the car. The highest bidder is the winner so they know they must make a competitive offer. Our online calculator has a state-of-the-art algorithm that determines who will pay the most for a car and instantly present an offer.

Calling a local junkyard, salvage yard, or scrap yard, they will likely try to low-ball with their offer in hopes of being the only option. With Junk Car Medics, a car gets in front of the best options in any area and gets the best price

Read more about who gives the best price for scrap cars.

They do and in either direction.

Until recently, there had been an overall downturn to the market, largely because other countries have started producing their steel and have stopped leaning so much on America for it. As the demand for steel (aluminum, copper, etc.) falls, so too will scrap car prices. However, this changed since the pandemic has rocked the globe.

Mainly, it's been good for junk car sellers as prices have swung back in their favor, but the volatility has made it difficult for anyone to predict what's going to happen. For instance, at the very beginning of the virus, prices tanked before starting to recover.

Scrap metal prices can be unpredictable, but not wildly so. Day to day may only see the prices change by a cent or two. Considering there are thousands of pounds worth of metal in cars though, it does make a difference.

At Junk Car Medics, we usually advise not to wait to sell because there's really no such thing as timing the market.

How much does it cost to junk a car?

It costs $0 to junk a car. Once you accept the quote, you will be paid in cash.