Head Gasket Repair Cost: Is it Worth the Money? • JunkCarMedics.com
Skip to content

Head Gasket Repair Cost: Is it Worth the Money to Fix a Blown One or Should You Replace It? 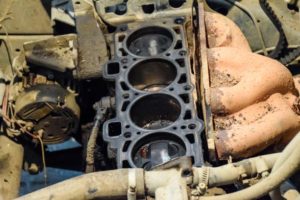 Even though the head gasket is one of the simplest parts of the engine in terms of construction, it is also one of the most crucial components. It is fair to say that the head gasket has a very important job since its failure can cause terminal damage to the engine or cause a serious lack of power. That is why we will explain this part in detail and tell you all about its purpose, common problems, and repairs.

What is the Head Gasket and What Does It Do?

For those who don't know what the head gasket is, it is a sealing gasket which is located between the cylinder head or heads and the engine block. Its main purpose is to keep the compression ratio at maximum and keep the coolant or engine oil inside the cylinders. The head gasket is easily identified by its flat shape, thin profile and big holes which are made for cylinders and coolant channels.

The basic design of the head gasket has changed very little over the years. However, the materials and production methods have improved and today we have several distinctive types of head gaskets according to the material used in the production.

Most current head gaskets are made of multi-layer steel which is perfect for engines with higher compression such as diesel motors, for example. The secret of MLS head gaskets is two to five layers of steel along with elastic compounds which makes those gaskets durable and capable of enduring high compression and temperatures.

Copper is the material used for older head gaskets and it proved to be very durable since copper is softer than regular steel and aluminum. The secret of copper gaskets is the fact that when the cylinder head is tightened, copper perfectly seals between the head and the block and provides the engine with a dependable gasket. Copper is still used today in some high-performance applications.

The composite head gaskets are made mostly out of asbestos or graphite but are not as durable as MLS or Copper. And since asbestos is extremely toxic, those parts are mostly discontinued today.

How Do Head Gaskets Break?

Also, the physical damage to the head gasket allows the oil and the coolant to mix and enter the cylinders, which can be fatal for the engine itself if not diagnosed early.

There are many reasons for head gasket failure, such as wear, installment of the inappropriate gasket, faulty part and so on. In the car repair business, head gasket failures can be described as external or internal depending on whether the failure is causing loss of power and oil leak which is visible, or other symptoms.

Owners of highly tuned cars experience head gasket failure more often since high compression of their engines, increased power, torque, and working temperatures put additional stress on this component. So, if you own a tuned vehicle or you're planning to modify your engine to produce much more power than a stock engine can, be sure to invest in high-performance head gaskets.

Blown Head Gasket: What happens when the head gasket fails?

When the head gasket is broken or blown, the first sign is the loss of compression and power. Simply, the seal between the engine block and the cylinder head is no longer as tight as is should be, so the engine is not able to produce compression needed to deliver declared power and torque.

The second sign is the possible overheating of the engine because the exhaust gasses are forced into the cooling system. Also, with a blown head gasket, coolant can enter the combustion chambers causing possible hydro lock and extensive engine damage. This only happens if a large amount of coolant enters the engine.

Sometimes, a blown head gasket allows coolant and oil to mix which is noticeable by the presence of mayonnaise-like residue on the oil cap. Finally, a broken or blown head gasket can result in increased oil consumption and damage to the exhaust systems, catalytic, and cylinder heads.

As you can see, the problems caused by a faulty head gasket can vary and we strongly recommend you check your car every time you experience something like this. Taking your car to the shop can save you a lot of money if the blown gasket is diagnosed on time. Not to mention, it can save your engine from early demise if you notice any of those symptoms and react in a timely manner.

As we already mentioned, the head gasket is a simple and cheap part. The cost of brand-new head gaskets rarely goes over $100, and most are well below that. However, the head gasket repair job can be very expensive because of the labor involved.

In order to repair an engine with a head gasket problem, you must disassemble the motor almost completely and take the cylinder head off the block to get to the broken gasket. The worst-case scenario is when the blown head gasket causes some serious damage to the cylinders, cylinder heads, or other components, requiring you will need to replace them as well.

Replacing or repairing an engine with a blown head gasket is a costly and time-consuming job and can take up to several days of work to get it done. Also, you will have to remember that if you own a V6, V8 or V12, or a boxer-type of engine it is double the work since there are two cylinder heads that need attention.

However, the price for this job is somewhat lower if your engine only needs a replacement gasket. In that case, there is no repair work involved, just replacing the faulty part and putting the engine back together. It is still difficult and time-consuming labor, but it's still cheaper and faster than repairing the damage caused by the broken head gasket. If you are looking for the actual price quote, expect to pay between $1000 to $2000 for the whole repair depending on the type of the engine and overall condition.

Of course, regardless of repairing damage caused by the blown gasket or just replacing the broken part, we strongly suggest you change the engine oil as well as the coolant after this procedure.

As you can already guess, fixing a broken head gasket is a complicated job since it requires the disassembly of the top part of the engine. On conventional inline and V engines, fixing the head gasket doesn't require pulling the engine out of the car. But if you own a flat or boxer-powered car (Porsche, classic VW Beetle, or Subaru), it could be better to do it with the engine on the bench.

After removing the cylinder heads you will see the exact damage to the head gaskets, state of the gaskets, cylinders and engine block.

And if your head gasket is beyond repair use our top car buyers to get cash for cars and junk cars.