When Was The Time To Get The Best Scrap Car Price Over Past Decade?

When was the best time to scrap a car for cash between the years of 2011-2020? When would you have received the best scrap car price?

But that's not what you would get for selling a junk car at the time.  That's the value of it to a service like us or to a nearby junkyard.  There's expenses and costs that go into dismantling the vehicle and what not. But we'll get into that later.

When you take an in-depth look at what your scrap car is worth, you will discover that its value is largely determined by the values of the various metals it is made of. Junk car prices change on a regular (or irregular) basis, affected by many different types of market forces. Some of them are:

All of these things can have a direct effect on what the metals in your scrap car are worth. The scrap car's weight in tons matters also in the price. To better illustrate this, we will show you how prices of the principal metals your scrap car is made of have fluctuated over the past ten years. Then we will apply these prices to a single average vehicle that weighs 2,149lbs to illustrate what that vehicle’s scrap value would be during each year of the past decade, where you'll see 2011 was the best year.

How We Chose a Sample Vehicle

We started with a study called “Vehicle Materials: Material Composition of Light-Duty Vehicles,” put out by the Argonne National Laboratory in September of 2016. This study listed the amounts of each material in the average car, SUV, and pickup truck produced each year from 1995 through 2014. We used the data from 2014, the most recent year. We then selected an average vehicle from that year, in this case a 2014 Honda Civic. We adjusted the proportional amounts of each material in the study results to match up with the maximum curb weight of the 2014 Civic, which comes in at a bit under 3000 lbs.

Here is the list of the major recyclable metals, along with the approximate amount of each found in our 2014 Honda Civic:

To keep things simple, we have combined the iron and steel content. We are also leaving out the small amounts of magnesium, lead and other miscellaneous metals found in the average scrap car. But as you can see, our Civic also contains around 800 lbs. of non-metallic materials with little or no scrap value. These include plastics, rubber, coatings (paint), textiles, glass, fluids, and lubricants.

That gives us our vehicle.

We'll use this vehicle every year, disregarding the year as to not confuse you. 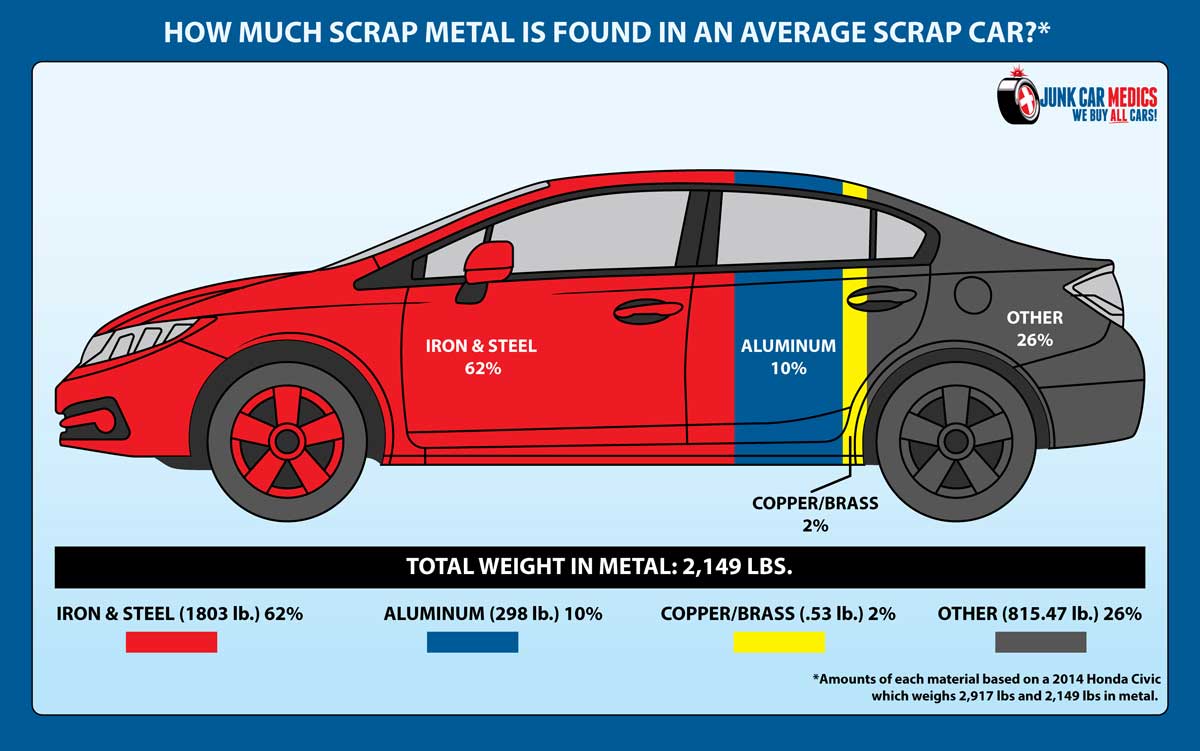 Next, we researched prices during the past ten years for these three metals that make up most the value of your scrap car. This way, you can see how the value of one commonly-available vehicle has changed over time. Keep reading for the results, along with a short description of how each of these metals performed over the past decade. 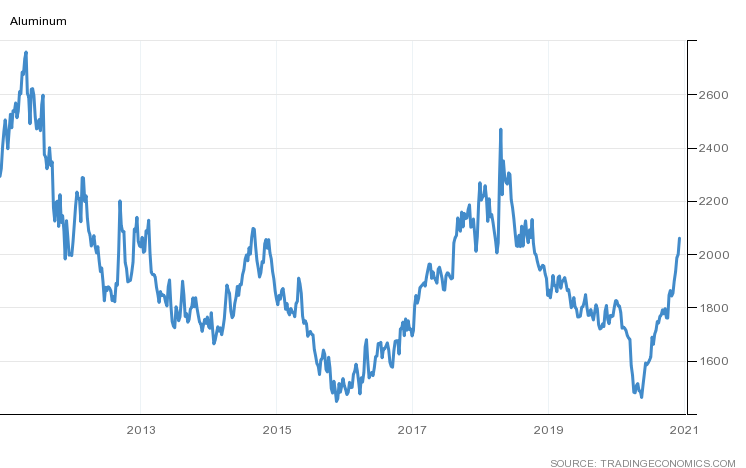 Aluminum prices are directly related to the world’s GDP (Gross Domestic Product) growth rate, so the more growth in the world’s economies, the higher that aluminum prices climb. During the past decade, aluminum prices peaked at $2752 per metric ton in early 2011. A multi-year downtrend then took the price down to $1424 in late 2015. Prices gradually recovered, reaching a high of $2466 in April of 2018. Aluminum prices then steadily declined until bottoming out at $1456 in May of 2020, followed by a strong rebound to $1931 as of November 13, 2020.  This was gathered from TradingEconomics.com. 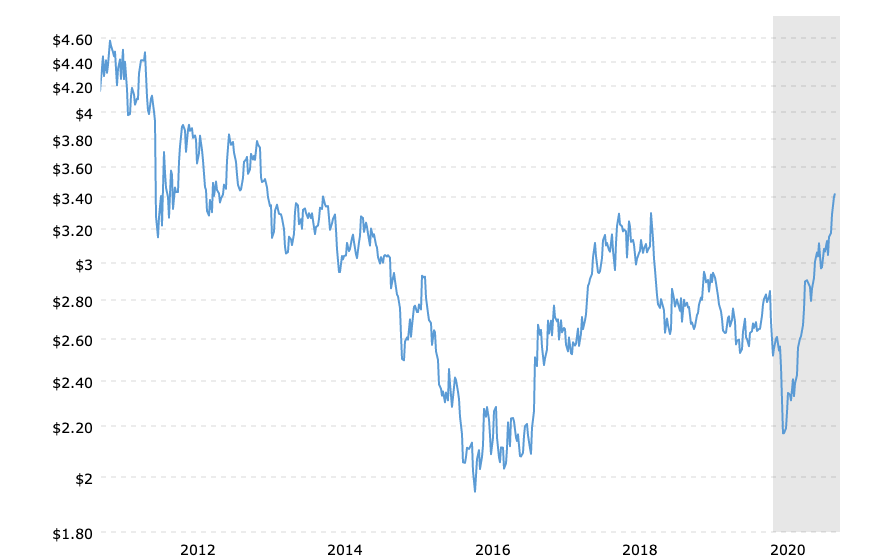 These three different metals have gone through similar cycles over the past decade: they all peaked at their decade-long highs back in 2011, followed by sharp price drops in mid-decade. They all recovered by 2018, then saw another large drop that bottomed out during the early months of the coronavirus pandemic. Prices have recovered somewhat as the Chinese economy gets back up and running, but the future is unpredictable due to the resurgence of the virus in the US and Europe.

Here are the scrap metal values for our Honda Civic over the past decade, converted from metric tons to English units of measurement where necessary:

And let's take a closer look at this history of scrap car prices for that Honda Civic.

The price history shown here closely follows the trends in metal prices over this period:

It’s also interesting to note that the large amount of steel (nearly one ton) is actually worth less than the 298 lbs. of aluminum, and that the 53 lbs. of copper is not far behind. 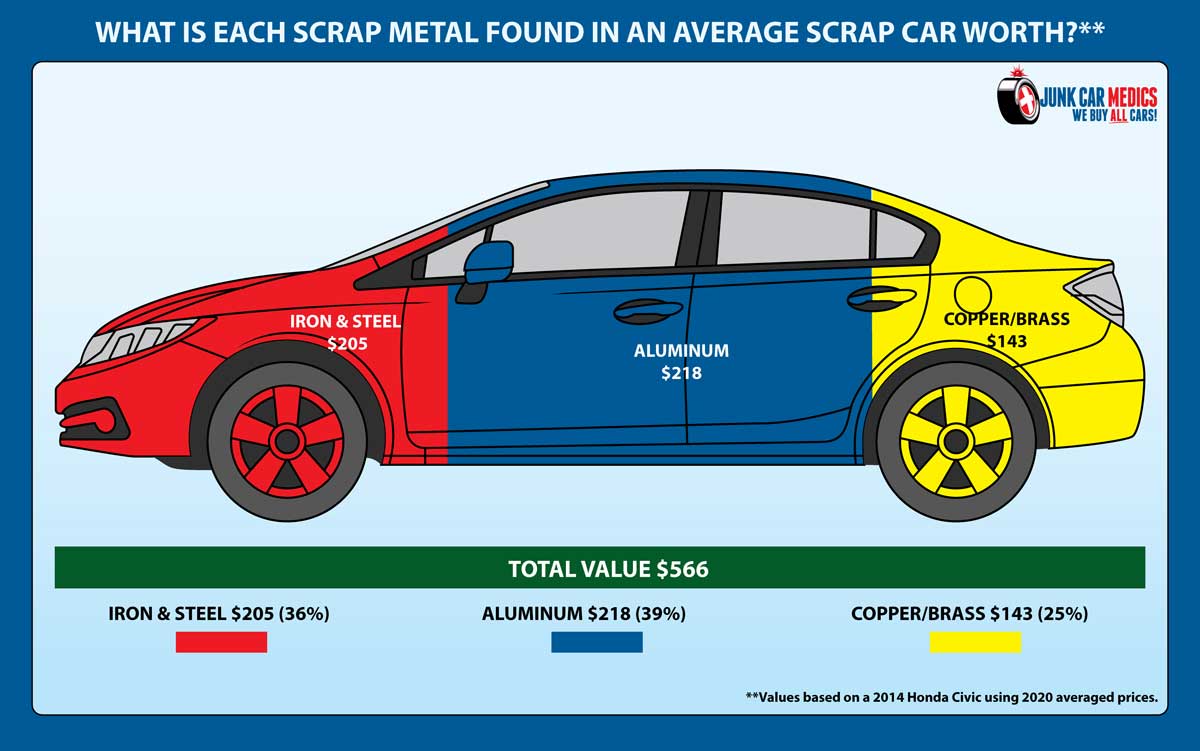 Does this mean that my scrap car is worth more than $500 today?

Not really. Getting $500 cash for junk cars is pretty tough.

These are prices for metal that is ready to be reprocessed and no longer in the form of a vehicle.

It takes a significant amount of time, energy, and labor to separate the usable, recyclable metal from a finished vehicle. While a scrap yard may receive prices like those shown above for the metal from a car like our Honda Civic, they must be compensated for what it costs to first remove that 800 lbs. of non-metal components and then process your scrap car into small pieces of metal, separated by type. The scrap yard also needs to make a profit on the transaction. Once that these costs are deducted, what’s left over is what you will be paid for your scrap car. It’s really that simple.

Is there anything else in my scrap car that’s of value? 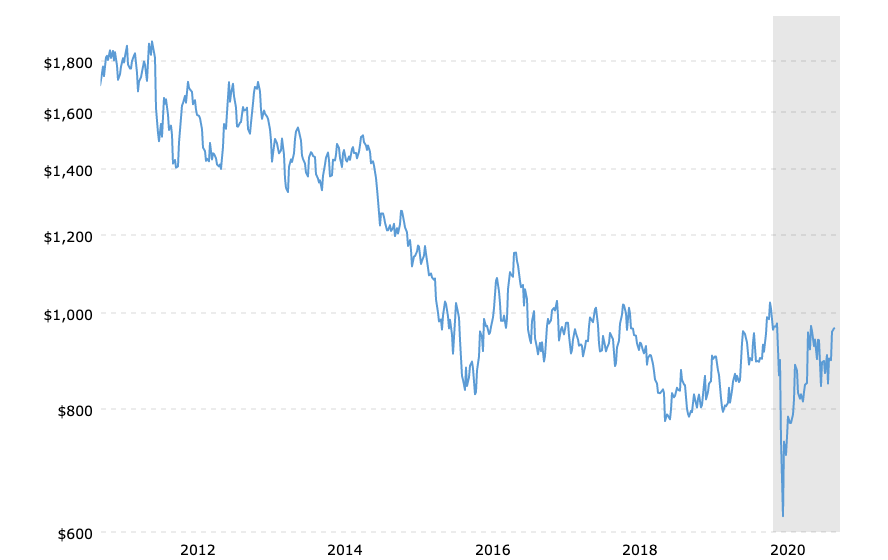 Platinum prices have not done well over the past decade

The story of platinum over the past ten years is a bit different from those of the metals we mentioned above. From its high of $1885 per Troy oz. in August of 2011, platinum has been in a sustained downtrend, declining steadily to a fraction of what it was worth a decade ago. Prices bottomed out at $622 in March of 2020 and have bounced back to $930 as of November 16, 2020. That’s a little better, but not great for the current value of catalytic converters.

What’s the platinum in my catalytic converter worth?

To give you a general idea of what these platinum group metals are worth, we will take an average amount of five grams of platinum in a catalytic converter and value it based on the average closing price of platinum for each of the past ten years:

Once again, it is important to understand that these precious metals are not just there for the taking – just like your scrap car’s metal body and structural parts, there is some processing to be done before the precious metals can be recovered.

Bottom line: the cost of processing is deducted from the inherent value of the platinum. When you scrap your car, the value of the catalytic converter should be part of the price you are paid for it.

We sincerely hope that this has helped you to better understand that there are many factors that determine what your scrap car is worth. Every scrap car is different and will have its own unique value at any given point in time.

So when the time comes to part with your scrap car and turn it into cash, you'll find the process is just better at Junk Car Medics. Junk Car Medics takes the hassle and pain out of scrapping a car for cash.

JunkCarMedics.com works with reputable auto junkyards, local car dealers, car auctions, and independent car buyers in your area, making us your Number One choice when looking to get cash for cars.

With our huge network and streamlined process, we get you an instant offer to scrap your car that is sure to beat the competition. You avoid the hassles of posting your car for sale online or dealing with shady auto junkyards when you work with Junk Car Medics.

The whole process takes only one or two days from start to finish. We'll be here for you all along the way, even after the sale (we even guarantee your checks). Join the thousands of satisfied customers each month who choose Junk Car Medics over the competition. We make it easy!