Sell My Toyota Prius for Scrap

Get an Instant Offer

Unable to find your vehicle?
Go back
Trustpilot

The Toyota Prius is the 40th most commonly junked car, according to Junk Car Medics.

Junk Car Medics network of car buyers purchases Toyota Prius in all conditions. When the time to sell a Toyota Prius, get a free offer online or by phone.

Junk Car Medics network of car buyers purchases Toyota Prius in all conditions. When it’s time to sell your Toyota Prius, you’ll get a free offer online or by phone.

The Toyota Prius is a parallel hybrid vehicle. It has a gasoline engine and electric motor that are distinct from one another and can run independently. 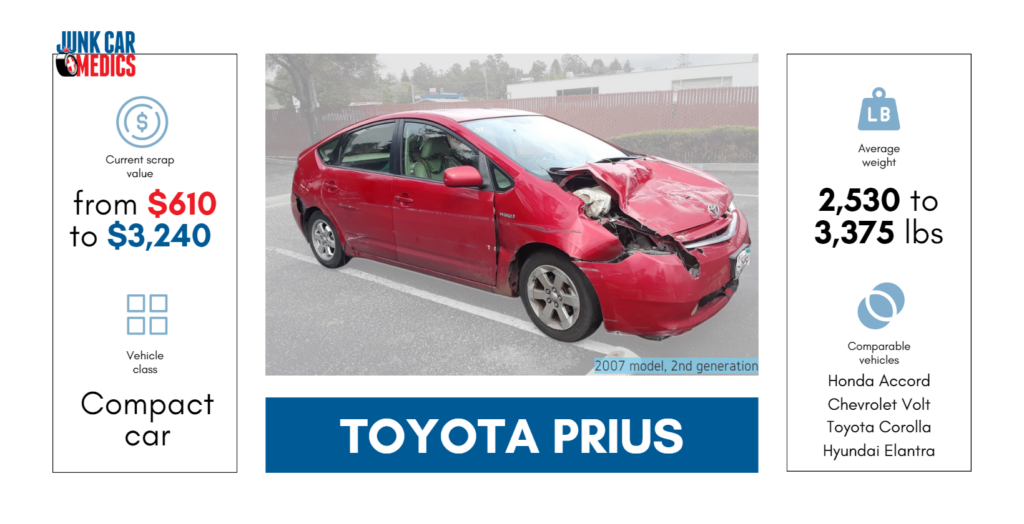 Launched in Japan in October 1997, the Toyota Prius was the first mass-produced hybrid passenger vehicle. It was eventually launched in the U.S. in July 2000 and only sold a modest 15,000 units during its debut year. However, sales picked up over the decade, and by April 2011, U.S. sales crossed the one million mark.

Originally launched as a sedan, the Toyota Prius was later remodeled and has been offered only as a hatchback since 2003. Incredibly popular among car buyers because of its excellent fuel economy, the Toyota Prius also offers ample cargo and passenger space. Big on utility, the Toyota Prius comes with various safety features, such as:

What is a Toyota Prius's current scrap value?

What is a Toyota Prius's Yearly scrap value?

Here are the current average junk car values of comparable models to a Toyota Prius:

What is the Toyota Prius Used Car Value?

Vehicles depreciate over time. The used car value of a Toyota Prius is an estimate of its worth after assessing various factors that cause depreciation. At Junk Car Medics, we appraise Toyota Prius models by checking their condition, model year, mileage, and weight. After looking at these and other factors, we’ll then give you an offer.

While offers vary based on these factors, we typically pay at least $500 cash for junk cars. Here are some recent offers we’ve made for Toyota Prius vehicles.

How Much Does a Toyota Prius Weigh in Tons?

Generally, the vehicle’s weight varies depending on the model year, trim level, and additional features. Newer models also tend to be heavier than their predecessors. Here’s the average vehicle weight of other car models compared to the Toyota Prius.

How Much Are Toyota Prius Worth in Scrap by Year?

The scrap value of the Toyota Prius varies depending on the model year. Generally, newer models fetch better prices than older ones because their parts are in better condition. Newer models also typically sell for more because junk car buyers can repair and resell them if they aren’t totaled. Here are various Toyota Prius models and their average scrap values.

What Are Recent Junk Car Prices and Values of Toyota Prius?

What Are Common Problems of Toyota Prius?

Although the Toyota Prius is a reliable car with excellent fuel economy, it isn’t flawless. Like other vehicles, it has its fair share of problems. Here are some of the most common problems Toyota Prius owners have experienced.

Besides these problems, here are some other common vehicle problems Toyota Prius owners encounter.

What Are the Values of Toyota Prius Scrap Car Parts?

Toyota Prius owners can get excellent value for their vehicles’ parts. Since the vehicle is imported from Japan, its parts aren’t readily available locally. As a result, Toyota Prius scrap car parts fetch top dollar because they are scarce.

How Much is a Scrap Catalytic Converter from a Toyota Prius Worth?

In comparison, the scrap value of catalytic converters used in many General Motors vehicles ranges between $97 to $127, according to Engineerine.

How much does it cost to replace a catalytic converter on a Toyota Prius?

According to Jerry Insurance Agency, replacing a Toyota Prius catalytic converter costs between $2,145 to $3,000. This is inclusive of labor costs. However, labor costs may vary from one repair shop to another. In comparison, it costs roughly $945 to $2,475 to replace the catalytic converter in most vehicles. Therefore, you may get better value for money by selling your old Toyota Prius cat converter instead of replacing it.

These are just some of the popular Toyota models we buy. Besides these vehicles, we purchase various other cars for cash regardless of their condition. Get an instant offer online or on the phone for these and other cars by calling 1-855-587-0227.

We Pay Cash for Prius Cars

Whether your Toyota Prius is irreparable, damaged, or totaled, we buy Toyota Prius vehicles regardless of their state. Contact us to get an instant cash offer for your Toyota Prius, Toyota Corolla, Toyota Land Cruiser, and Toyota Sienna, to name but a few Toyota models we buy for cash.